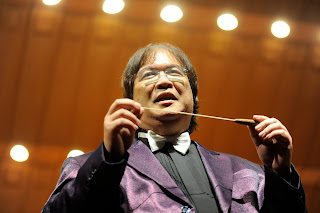 On Wednesday night, after the gorgeous strains of Mahler's Ninth died away, I have to admit that I had a lot of mortality issues.  Mahler 9 makes you think about death a lot.  Death the lover, the dancer, the cynic, the consoler, they're all present in this piece.  You have to play this piece as if it's the last thing you ever do, and during the last movement I really felt as if it might be the last thing I ever did.  And to be honest, I really did feel as if I had died.  During the reception afterwards I was virtually incoherent and the next day I was really ill and had to cancel a Rossini rehearsal.

It was only the previous day that I knew I would be using a baton last used by Leonard Bernstein to conduct the same symphony 21 years ago.  Stan Gayuski, a member of the New York chapter of the Mahler Society and (as all Mahlerians are) a little crazy, came to lunch and had it with him.  "I want you to use it for this concert," he told me.

It was an awesome artifact.  The cigarette stains alone hinted at a world that doesn't exist anymore ... a smoke-filled, largely all-male world.  I thought back to my first encounter with this symphony, when I was 13 and visiting Paris ... that was with a wheelchair-bound Otto Klemperer, who knew Mahler personally, for God's sake.  It was a concert which changed my life, the first "proper" concert I'd ever been to.

So what was it like?  Did I get possessed by the spirit of Bernstein, floating over to the Thailand Cultural Center from whatever Sheol he currently dwells in?  It is not that simple, any more than possession itself is that simple.

You all know that the Thais are Buddhists, but in a way they're not.  Buddhism in Thailand is a rich and lovingly-sculpted façade that covers a deep and potent tabernacle of animism.  Animism, the old religion that was here before Hinduism, Buddhism, and Christianity (all of which have left their mark) is about the essential "livingness" of all matter.  Water, air, land, rocks, buildings, and even batons have spirits.  You can talk to the wind, to trees, to animals.  And there is no question to me that waving that stick is as much about magic as anything in a J.K. Rowling novel.

Bruce Gaston, as a young student, used to hang around Bernstein quite a bit and one day, he remembers, Bernstein said to him, "If you conduct Mahler's Ninth properly, things happen."  That's because Mahler's Ninth isn't just the death-song of one death-obsessed composer, but a death-song for the entire romantic movement, for an entire century of a certain sensibility.   It is a symphony absolutely drenched in death.  Clutching that flimsy piece of cork, mingling my DNA with the DNA of a dead hero, was in a real sense an erotic encounter with death, because to a romantic sensibility, love and death are the same.  In the last movement, I understood for the first time empirically why in Shakespeare's English, "to die" had the double meaning of achieving an orgasm.

And things surely did happen.  Stan Gayuski fell into a terrible state at the end of the dress rehearsal and almost had to be carried out; he was too weak to attend the performance and could only watch it on video; it fell to Singapore conductor Adrian Tan to write a review for the Post which Stan had promised to do.  Friends of friends dropped dead or attempted suicide the next day.

The day after the concert, whose success was way beyond what I envisioned — I mustn't forget to mention that two separate ex-pats who don't know each other emailed me to say that this was the most impressive classical music event they had attended in forty years of living in Thailand — I received a vicious email spam attack.

Copies of a letter from a fake email address, purporting to be a member of our orchestra, were being circulated on the net.  The letter talked of my venality, my evil, the fact that they weren't proud of being in my orchestra because of my evil exploitation ... you get the picture.  The same thing happened to me in 2006 right after one of the biggest international successes we had managed to carry off: the premiere of my opera Ayodhya.  A massive email smear campaign.

The identity of the perpetrator of the 2006 campaign became apparent a year later when her mother accidentally invited one of my friends to join the "let's destroy Somtow" plot.   It must be said that the plot almost worked; someone was even quoted in Opera Magazine as saying that the Bangkok Opera was moribund —this before we had the most artistically successful year in our history.

The 2010 smear campaign seems to have already petered out after only a week.  Perhaps, possession of the Bernstein baton constitutes holding one of the "magical objects" that the Cambodian Prime Minister was recently using to curse our own Mr Abhisit.

The attacks were followed by a shower of blessings.  Barbara Bonney's agent contacted me and the next thing I knew, she agreed to do the soprano solo in our Mahler 4.  If Bernstein's baton was like receiving a relic of the True Cross, getting Barbara Bonney's agreement was not unlike a visitation from the Virgin Mary.  After a few days of absolutely debilitating post partum, I felt reborn.  Visiting the old city of Korat and hearing the ancient songs of the village people also was a renewing experience.  When Bruce Gaston and I played our Avatar Duet this Sunday, it was as if we were reinventing music itself.

When you do Mahler Nine, you have to start thinking beyond death.  I'm finding myself (as Schönberg said) "breathing air from another planet."  I don't know what's going to happen next, but whatever it is, it is going to stoke the old "sense of wonder" in a big way.
Posted by Somtow at 2:03 AM