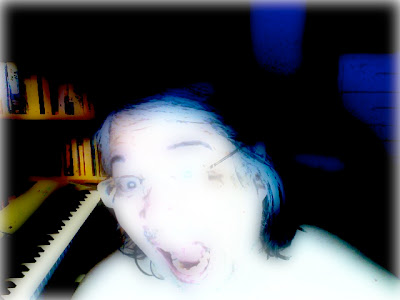 It might as well be revealed for the first time on this blog … everything else seems to be. I am composing a requiem at the moment. I've been working on it for a very very long time … for months and months. It's the first really major bit of Latin liturgy set to music by a Thai composer. It's a gift for HRH Princess Galyani Vadhana, who, I am sure, continues to preside over the classical music world here in Thailand from above.

When the princess left us, it seemed like everyone around here rushed out to exploit the occasion, throwing together memorial concerts left right and center. Some were beautiful; others seemed put together with little consideration for the princess's own tastes in music, which were not only eclectic but highly intellectual. (One of her favorite symphonies, for instance, was Mahler No. 6 — hardly the choice of a dilettante.) These concerts were all very public, very self-conscious, and I suspect that some of them were not that deeply felt.

It occurred to me that if were to compose something in memory of this person who was not only a major figure in the classical music community, but also my personal benefactor, I ought to try to create something that would make some attempt at being a worthy memorial. This is why I started to compose this requiem: without any guarantee of a performance, and not particularly caring about possibilities and practicalities. It has many things in it which might not be possible ... a boys' choir singing from a gallery, an offstage brass band, and an organ in addition to the 150 or so other performers that come standard in such works.

All week I have been composing the Sanctus of this Requiem, which is, for me, a very new idea: over an extremely soft G major chord that sounds, shimmeringly, throughout the entire movement, four sopranos sing strange melismas, weaving in and out of each other in simultaneous different modes. I got the idea from the fact that the words "sanctus, sanctus, sanctus" are supposed to be uttered by the four cherubim as they face the throne of God. If that scene were to be perceived by a human being, surely, the ecstatic cries of the cherubim would be heard only as a faint echo, and the immutable glory of God would be a glowing single major chord that never changes though being subjected to endless textural and coloristic variations. So last week, Trisdee complained to me, "Why are Sanctuses all so loud?" and I was able to say, "Not the one I'm writing."

So, at three am yesterday, shortly after I finally finish what seems to be to an incredible breakthrough, and actual vision of the the divine, I experience a hard drive crash. Hours later, after running every conceivable data recovery program, I get the drive back (both of them, actually -- two of the crashed.) The only file that will not open is this Sanctus ... both it and its two backups have been incomprehensibly reset to zero bytes.

Now. after 24 hours of mindboggling work, I have managed to rewrite the movement. Trisdee and Jay, who both heard bits of it while they were being composed, recalled a few snatches of the soprano solos. It is not the same movement as the one I lost. It's by no means done but the outlines are all in place and Trisdee told me that maybe this was fate's way of making me add some better ideas to something I thought was perfect. He said that it might even be a bit of intervention from on high — and that this version is probably even better than the lost one.

It may well be better. Right now I am feverishly putting in the finishing touches. This may well be the version that is "supposed" to be heard. It does have a better overall structure than the first version, perhaps.

But I can't help thinking that the lost version contains some kind of absolute reality that can now never be grasped. I can't help believing that the Holy Grail was in my presence, and when I reached out to touch it, it blinked out.

I draw comfort from the belief that the person for whom the Requiem is being composed must assuredly have heard it. It is a gift for her, and its vanishing into thin air fulfills my secret wish, that this composition not be a big public display of crocodile tears, but a private and entirely personal offering.

Meanwhile, the public will hear another version; the movement as seen through the veil of a flawed human memory, just as the words "sanctus sanctus sanctus" are themselves heard as an echo, not from directly gazing into the divine Presence.

I'm beginning to accept that this is what was always intended.
Posted by Somtow at 11:51 PM