The Stars are the Styx 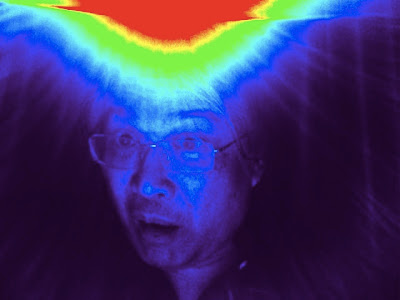 The Songkran Holiday goes on and on and on, coincidentally interrupting the opera's fundraising activities to such an extent that we might have to reshuffle May. Yes, only two days have been added to the holiday by the government, but that means we lose the whole week, and also the week on either side of that week.

So we're suffering a bit of a setback and it will probably take several weeks of hard work to get things back up again.

This morning I'll talk about astrology and about bribery, but first I should let you know about the lottery results vis a vis my dream.

I bought the closest lottery ticket I could to the numbers that appeared in my dream, but, alas, my powers of ESP, or the ability of the dead people to communicate with me, were not quite up to it. One of the winning numbers, 850531, did in fact contain all the numbers alluded to in the dream (if as I did, you counted 4+4 as 8). The ticket I purchased, however, was 801531. If anyone reading my blog did purchase the correct number, I demand a percentage.

Astrology is a very important feature of life in Thailand. No one would think of doing anything important without checking with an astrology. My sister had an astrologer check for the ideal times for her Caesarian sections in order to guarantee the most auspicious future for her kids. So it is only natural that astrology should figure prominently in the post-troubles punditry.

My friend Mr. Thanong, one of the most balanced and perceptive political pundits in this country, backed up one of the most astute analyses of the political situation in The Nation with references to astrological charts. The Bangkok Post yesterday featured two astrologers, one who had predicted victory for the government, the other for the protesters, showing how the latter is now in the doghouse for incorrectly reading the omens.

I myself have often been defeated in life by the fact that I have a Mars-Venus conjunction in my third house.

This is all very mild compared to the Burmese junta moving their capital city to the middle of nowhere on the instructions of an astrologer, but it ought to alert the western media that they must use a little more cultural relativism in their analyses.

On facebook, I mentioned that my housekeeper told me they were offering people in her village 200 baht to don red shirts and protest. I immediately came under attack for being an elitist pig. Today, I had a chance to discuss the 200 baht with her in detail. It was so much lower than other figures that have been bandied about that I knew there must be more to the story.

She explained the situation to me quite explicitly. She said, "In my village, the day laborers get 150 baht a day for harvesting rice. It's a hot, backbreaking job and they don't get fed. Of course they were willing to take 200 for a free holiday to the big city and free food. Anyone would do it." It brought home to me the fact that, though domestic staff receive comparatively low wages, she's actually earning more than twice as much as she would at home, plus getting free food and medical care ... not to mention her own cable controller. Still, 200 is very low. I saw a figure of 3,000 baht, with a contact number, scrawled on a bathroom wall in Fortune City. And my friend Veeravan, also on Facebook, said that her housekeeper was quoted 800. And the conventional wisdom, supported by what looks like Thaksin blooper on Youtube, puts the fee at 500.

What happened to the rest of the money?

So, I put the question to Daeng, my housekeeper, and she said, "Oh, it's the middlemen. There is a sub-agent in the village and they actually pocket most of the money themselves."

My housekeeper may be uneducated (she can barely read) but she ain't dumb. She is perfectly aware that, in her village at least, the real issue is food, not democracy. And she's been quite articulate about it.

Were the yellow shirts also paid? I don't doubt that some were. However, I very much doubt that my mother, who enjoyed a day at the protests last year, would have accepted 200 baht.

Were all the red shirts paid? Of course not. I know Dr. Weng (presently under arrest) personally. He is an idealistic, honorable and passionate individual. I am sure that people such as he are in fact devoted to improving the state of our democracy. I hope that, when dialogue finally occurs, people such as he are invited to the table.

Whose side am I on myself? The side of reason.

The practice of buying elections will only stop when the price becomes unaffordable. That can only happen when educational and living standards improve all through the kingdom. Any two-bit billionaire can buy a country at $5 a vote, but if the figure rose to even $100, even Bill Gates might hesitate.
Posted by Somtow at 9:35 AM