Watching the deluge from afar 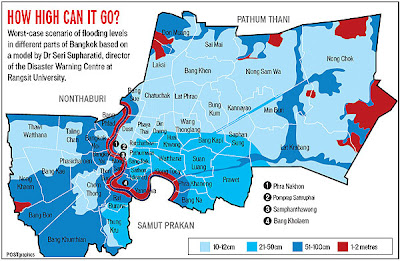 I am afraid that this image, reproduced from the Bangkok Post's website, is not a comforting one.  I live in the Watana district of Bangkok and you can see it is calculated to be a rich turquoise zone ... i.e. it will be under about  9-20 inches of water.  Although I prepared the house for a possible onslaught of 50 cm (about 20 inches) and therefore technically I am already prepared for the eventualities depicted herein, so far most predictions haven't been terribly accurate.
Meanwhile I'm being urged by all in Bangkok to hang on in California for a few more days, but worries about the situation in Bangkok may cause me to come back pretty quickly.  We'll see how things go...
Trisdee, meanwhile, is in the thick of it as a flood volunteer.  If you follow his tweets @trisdee, you'll get a lot of good info.
Posted by Somtow at 1:12 AM 2 comments: 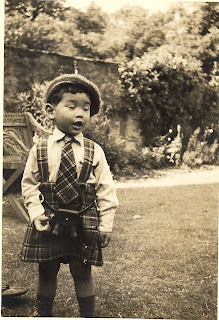 I will just entertain you with this interesting example of Dave Brubeck on harps at the Siam Society ... since there's nothing to do now except await the deluge...

We are all sitting here worrying about whether our houses will be submerged in the next few days.  It's foolish, I know, but I am sort of gambling on our street staying above water for a few more hours.  Our papers give wildly contradictory reports - sometimes even within the same issue - and false alarms and panics spice up the general anxiety level from time to time.

It can take the kind of crisis that knows no political coloration to reconcile a fractured nation, and it can take a crisis to build a real leader out of a puppet. I think we are all hoping that both these things will happen. Many more people have died in the flooding than in any of these man-made crises of the last few years and perhaps this will put our world into perspective.

These are the things we all hope for, but at the moment, the prospects seem a bit slender.  The PM won't declare a state of emergency though if this isn't an emergency, I don't know what is.  Instead, a controversy rages about her Burberry boots.  The choice of which floodgates to open is fraught with politics, because on this choice depends who will be flooded in Bangkok ... and Bangkok is divided not only geographically but politically.

When Yingluck became prime minister, there was a certain amount of optimism and hope in the air precisely because she has no track record.   All she had to do was show an independence of spirit and we were all happy to give her the benefit of the doubt.  A natural disaster can be a political godsend, bringing people together, occasioning inspiring speeches on unity ... she would not be the first leader to make political hay out of tragedy.  But unfortunately she hasn't had any traction from this.  Even the spectacle of her weeping on national television has not helped; the sexism of our public is such that when a male leader weeps, he can appear sensitive and caring, but when a female does so, she can appear flighty and weak.  Alas, you have to play the cards you are dealt.

Superficially, she's in a similar position to Abhisit last year -- it looks like she's twiddling her thumbs while the pressure mounts.  However, the details of the thumb twiddling are somewhat different.    Abhisit dithered because he wanted to avoid a bloodbath; his political enemies needed a bloodbath in order to assert a moral victory.  Yingluck's adversary is not a human political foe, but Nature Herself.  And nature doesn't gain any political clout from the number of people who suffer or die.  Nature isn't running for office.  If Yingluck is really decisive, even if a lot of people don't like her decisions, she will gain in stature.  But her choices are indeed the choices faced by rulers: who must suffer more for the general good?  And this is not a choice that one faces when running, say, a large corporation.  Which makes this a first-time moment.  And I'm sure this fills reds, yellows, blues and multicolored shirts with trepidation (not to mention the rest of us.)  The hand of God can't be deflected by a New York PR firm.

Meanwhile, Trisdee, with great civic sense, has been volunteering at Dong Muang Airport, moving sandbags and making care packages and what have you.  He's made a lot of new friends and the number of his twitter followers has increased vastly.

Meanwhile I'm abandoning ship for a while, because I have two concerts to conduct in L.A. next week - plus the world fantasy convention - a strange bit of seredipity.  It will be odd to be "home and not home".  I'm slowly starting to look forward to it.  It feels strange to leave in the midst of all this, and of course there is the chance that the airport would be underwater, but....

The big question is will I have a house to come back to, or will I be living in a very upscale fish tank?
Posted by Somtow at 3:27 PM 1 comment: 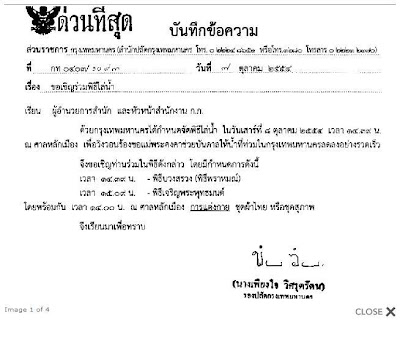 And who knows, it might even work!  We'll soon see next year, when Bangkok survives the apocalypse and the rest of you guys are carousing with Davy Jones.
Posted by Somtow at 4:27 PM No comments: