The Mirror Has at Least Two Faces 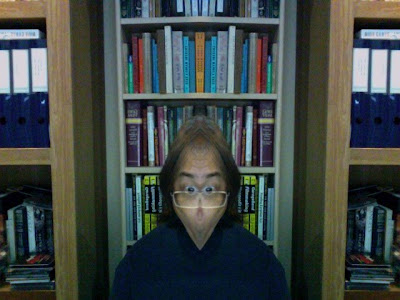 As one of the few people I know who is switching back and forth between the redshirts' TV station and the regular news, I am astonished to know that I am inhabiting two completely different cities named Bangkok.

In the first Bangkok, a bunch of wild hooligans, led by an absent rabble-rouser who has already shifted his own family to safety in another country, is running rampant, smashing the prime minister's car, shutting down important international conferences, and generally rioting incoherently. A bewildered government is reluctantly clamping down, trying at all times to be the voice of reason, going about it all in a eminently civilized fashion. No one has been killed, though a few stray bullets have regrettably injured a few people who are now receiving the finest medical treatment.

In the other Bangkok, freedom fighters are storming the Bastile and demanding that hospitals be raided in order to liberate the "bodies of the martyrs." The prime minister, I heard, is a vicious murderer who has trampled over the squirming corpse of democracy, silencing the voices of dissent. In this Bangkok, Thaksin is the messiah who will sweep the country to a glorious future and build a new Thailand on the bones of the aforementioned massacred martyrs. (Though they seem to be scraping the bottom of the barrell to find any martyrs right now.) I just saw a woman screaming that the U.N. should send troops (thus equating the situation in Bangkok with Darfur or Kosovo.)

Switching back and forth provides an astonishing insight into how different realities can be. It speaks to the very nature of truth.

There is a very, very difference between the first bunch of protestors (the yellows) and the current batch. The yellow bunch were all very middle class, even upper class. They brought their maids to the protests so that they could continue to be served their meals. My mother went. My sister and her little kids went so they could be photographed with Sondhi. There was this sense of moral purpose. Their TV show was pretty entertaining, as they had the country's top pop stars appear on stage from time to time. The yellows aren't too happy right now; they've handed in a petition urging the entire military top brass to resign for failing to deal with the riots.

By contrast, what we see in the red show is no fun at all. These guys didn't bring their maids. I reported months ago seeing a graffito offering red shirts 3,000 baht and a free shirt to join the protests, and giving a phone number to contact. My maid, who is very much in touch with the red shirts' social network, told me that word is that the pay is now only 200 baht. Nevertheless, there are people I know on their show as well ... people like the fiercely patriotic Dr. Weng. I know him, know for a fact that he's a good person. We worked together on the World Peace concert years ago and both of us were clearly on the side of Good against an extremely Evil force.

The voice of reason rarely prevails against blind, inchoate anger. Yet, somehow, flicking back and forth between the stations, who mirror the real world in such starkly differing ways, I personally cannot help feeling that I would choose the side of reason for once, even though I am by nature unreasonable.

Maybe it's just the Etonian solidarity thing. On the other hand, the prime minister did go to Oxford. Well, you can't have everything.

My friend (and fellow Cantabrigian) Dr Sumet says in the paper that we must all go and deliver flowers to the prime minister's house. I will do it, if I think I can make it down the street without getting drenched by Songkran revellers.

I do want to talk a bit about this martyrdom thing because I think that if Thaksin is to salvage any piece of his credibility, he must go to jail.

Every important figure in world history who fights for democracy has faced the jail thing. Whether it's Gandhi, Aung San, or Mandela, the willingness to go to jail has always been a significant factor in elevating these people to sainthood. Now, admittedly, Thaksin is under sentence for fiscal skulduggery, not for his beliefs. But there's no reason why a good PR firm couldn't parlay a couple of months of jail time into an agonizing inner struggle every bit the equal of Mein Kampf. I wonder why he hasn't thought of that.
Posted by Somtow at 10:27 AM