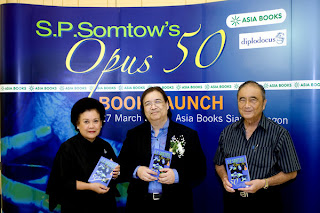 Last night I conducted the Rossini in purple, because I wished to show my affection for HRH Princess Maha Chakri Sirindhorn whose birthday it was.  The concert went far better than expected: a standing ovation ... one gentleman in the audience said he wept three times ... and a wonderful after-party in the half-circle room.  The orchestra, whom I get prouder of every day, was assured and idiomatic.

Today, I was so tired that I slept all day.  When I woke up, the red shirts were blocking access to the city's finest shopping malls — they really got Bangkokians where it hurts — forcing the middle classes to go without Starbucks.  Their rhetoric has become more strident and they seem to have basically lost most of the ground they gained by appearing so reasonable on TV.  Perhaps it's because Thaksin, from whom they had seemed so ready to be divorced when they met with the prime minister, phoned in from some country or other.  Perhaps it's because shirts of other colors started their own protests.   It must also be rather galling that the TV punditry, in channel after channel that I flicked through, seems overwhelmingly to favor putting a lid on the rallies and placing them within civilized constraints, and that various polls conducted by universities show only 25% of the population of the country to be in sympathy with their demands.

Then there's the daily bombs; none of them ever hurts anyone much, and the red shirts deny all connection and have even ejected some more pro-violence elements from their membership, but they cannot help but cause people to suspect something underhanded ... either sabotage by the reds or propaganda-inducing self-sabotage by the government, or some other even more Machiavellian theory.

It is a good thing that the crowds have not been dispersed by the police — the time doesn't quite seem appropriate — but at some point, the people of the city are just going to become too inconvenienced.  At that point, something drastic may happen.  Today, the driver took the day off because there was no point in driving anywhere anyway.

The Bangkok Opera's concert season is already affected since our April 20th Italian Gala is having to be postponed.  Today, the kids' string quartet couldn't come and rehearse their Schubert because the roads were too clogged.  And of course, I have to avoid wearing half the clothes in my wardrobe in case there's a color that offends someone ... thank god I'm taking more drugs and going back to sleep soon.

As I write these words, a police deadline for the demonstrators to disperse has come and gone without anything happening.  The mysterious "Khlui Marana" is working on a "Weng Rap" from an undisclosed location.

As I have vowed to take a two-week vacation (a working one) I believe that what I am actually going to do this week is to attempt to finally finish my opera, The Silent Prince....  Today, however, I am preparing myself for this daunting task by watching a lot of TV punditry, alternating with episodes of Star Trek — Enterprise, a show I missed when I de-immigrated, but recently arrived here in a massive box with dozens of DVDs in it.
Posted by Somtow at 11:35 PM