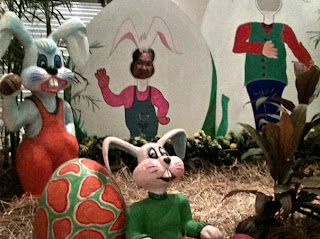 As an ordained minister of the Universal Life Church, I might as well send an easter message to my throngs of disciples, which may one day reach double digits.

Though generally thought of as a Christian celebration, Easter has roots that go all the way back to Neolithic times.  The myth of the God-King who is killed, renews the earth, and comes back to life in three days is part of the very fabric of our culture.  The story is as old as agriculture itself; in its earliest forms it's usually explicitly a corn-god or other vegetation god, ripped in pieces by wild women, perhaps, or sacrificed by being flayed alive ... whether it's Tammuz, Xipe Totec, or Jesus, the basic story doesn't change that much.  A heroic demi-god comes down to earth, allows himself to be brutally slain, and the blood-sacrifice fertilizes and renews the earth.  Easter bunnies (which are actually of course, March hares, symbols of fecundity) and Easter eggs are all part of the pagan ritual that became inextricably intertwined with St. Paul's brilliant and cosmic realignment of events in a remote province of the Roman Empire.  It's a pity that some of the more fun elements, like the traditional spring orgy, have been sanitized away, but perhaps it's just as well, since we're all into safe sex these days.

This is a roundabout way of saying that on Easter, regardless of one's religion, it might be good to think of things like renewal, rebirth, and resurrection.  In Thailand, Songkraan is approaching.  The splashing of water also symbolizes fertility, hope, and fresh beginnings.  We are a day past Easter Sunday and a week from the annual ritual of cleansing and renewal.   Yet Bangkok is paralysed by gridlock and the prime minister is showing remarkable restraint ... a level of restraint which is causing some residents of Bangkok to wax nostalgic about coups and things.  This is therefore dangerous.

My anonymous colleague "Khlui Marana" has recently posted this interesting "rap" on Youtube.  It is of course a highly entertaining reductio ad absurdum of some of the Good Doctor's more ludicrous claims.  But it made me think.
I've always liked Dr. Weng.  Ten years ago, when he and worked together on the World Peace concert after the 9/11 catastrophe, I found him to be idealistic, passionate, and highly sympathetic.  How could he therefore believe that the Code of Hammurabi espouses democratic and peaceful demonstrations against the government, or that the British system of government tolerates massive demonstrations that clog main thoroughfares?  Or that Abhisit intends to slay the red shirts in a fascist bloodbath?  These are all words that came out of his mouth during the peace negotiations.
What the Code of Hammurabi actually says is that if a man makes a false accusation against another man, the man accused shall leap into a river.  If he drowns, the accuser gets to keep the dead man's house.  If, however, the river-god should prove his innocence by not swallowing him up, then the accuser shall be put to death and the accused will inherit his house.  It also says that if a man falsely accuse another of a capital offence and he is proved innocent, the accuser will himself be put to death.

Therefore, according to Hammurabi, Abhisit is home free, unless he somehow missed having swimming lessons at Eton.

As for the British system tolerating massive protests, I can't imagine the police sitting by idle if a seething mass of irate Tories were to try to close down the City of Westminster.  We probably need to set up our own designated Hyde Parks.

This kind of easily disproved and overblown rhetoric is not very helpful when it comes to solving Thailand's very real problems.  In the end, the red shirt movement has lost all the ground it gained when it appeared with the prime minister in a calm discussion of real issues on national television.

When I was about seven years old, there was a vast gap in what was essentially a two-class society.  In our home, and the homes of everyone I knew, servants crawled around on the floor and did not look directly at their masters' faces.   They were paid 100 baht a month and never had holidays.   There have, in fact, been enormous changes since then.  This was, after all about a half century ago.  Thailand's growing pains have been about the growing awareness and empowerment of the middle classes.  When the elites were a remote, alien race, and there was absolutely no concept of social advancement, there was stability.  It is the existence of upward mobility in the new society that incenses the non-upwardly mobile.  And the problem can only be solved by extending the ladder all the way down, and teaching people how to climb aboard on their own steam, not via handouts.

There are still two Thailands, but it's overly simplistic to think of them as rich versus poor, or elite versus proletariat, or even as city versus country.  In the end, the two Thailands are probably really Educated and Uneducated.  That is the heart of the problem, and where all our tax baht can be most wisely spent.