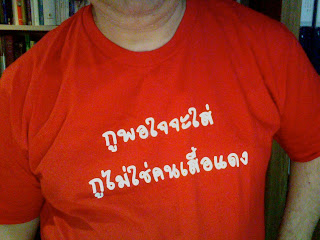 Probably not the right moment for our Prime Minister to behave like a gentleman; the red shirts are now using the old "briar patch" trick to get the police to look in the wrong direction, and they even managed to lock some of the police up in the park.  There are grenades and bombs all over the place, though they tend not to work very well or miss their targets.   A mother had to be rescued by cops when the red shirts wouldn't let her take her daughter to the hospital and the people of Bangkok are starting to boo the red shirts as they go by, meaning that altercations and perhaps violence might happen quite soon.

Many of the people I know are starting to wax nostalgic about the days of Field Marshall This and That and fantasize about the good old days when the army could go around shooting people on sight.  (Those, that is, who are old enough to remember what a real dictatorship was like.) But really, turning the clock back is a silly idea; the miserable failure of the 2006 coup to accomplish anything — good or bad — is ample proof of that.

It's almost 2 am and rumors are flying thick and fast.

By tomorrow, farce may well have crossed the line into tragedy.  But at least there'll be another "rap" from the endlessly inventive Purakhanda.
Posted by Somtow at 2:00 AM