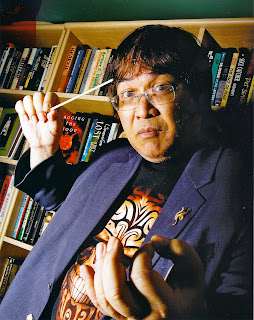 So, while surfing through the screens and screens of TV punditry today, I come across a fascinating discussion amongst Thailand's leading astrologers and magicians about the efficacy of the blood spattering ceremony which the redshirts have now moved up to 4 pm, presumably so that it will still be light enough for video.

I see no reason why we shouldn't have political commentary by haruspices and shamans; it is surely no more outlandish than the O'Reilly Factor, and only serves to enhance Thailand's reputation for "mysteries of the east".

I would like to mention for my friends out there in that alien world called "western civilization" some of the interesting theories propounded by these experts.  This discussion, you must understand, is a perfectly serious one, carried out with the same passion and breadth of historical context as any political free-for-all in a U.S. TV punditry-fest.

First, there's the Cambodian Theory, which states that pouring the blood on the headquarters of the government is a Cambodian plot to ensure the return of Thaksin.  (Not sure of the logic of this; as a professional fantasist I for one would never use such illogical magic in one of my novels.)

Second, a theory propounded by the chairperson of the Thai astrologers' society, which is that this is simple sympathetic magic in order to gain victory and the sort of thing anyone would do under the circumstances.

Third, someone has come up with a historical basis: in the reign of King Naresuan, apparently this ceremony was performed, bathing the King's feet with the enemy's blood and letting it soak into the soil.

Someone else pointed out that using your enemies' blood to ensure victory might be a logical example of sympathetic magic, but spilling your own might have the opposite effect.

It was also pointed that the Cambodian Theory would automatically backfire, because you need to be "pure of heart" to perform that rite.  (Is there a "pure of heart" certification for this?  The catholics, with their thorough grounding in Roman Law, have figured out a brilliant doctrinal workaround stating that transubstantiation will still work if the priest is not pure of heart because God is working through the imperfect vessel.  This means that a priest can have it off with an altar boy in the vestry and still successfully turn the bread into the body of Christ.)  However, without this doctrinal protection, according to the TV experts, the magic would reverse itself and the intended consequences would occur to the curser, not the cursee.  Scary!

The astrologers all agree that the entire ceremony can easily be negated by the simple act of sprinkling some holy water from the Emerald Buddha Temple over the blood.  They explained, also, that the smell can be removed using a mixture of flat coke and vinegar.

They know this because, of course, in Thailand, this kind of thing happens all the time....
Posted by Somtow at 12:54 PM