Bring Out the Leeches 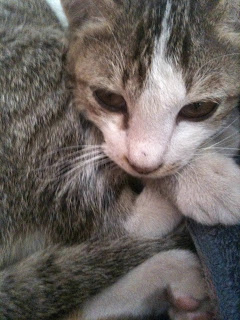 Well, today has been a very inconvenient day.  At 4 pm, my street was filled with red-shirted protesters bearing buckets of blood, headed towards the Prime Minister's house, and the police were barricading the way to my house.  I decided it was best to cancel choir practice.

But there was something suspicious about it all.  The redshirts had announced they were going to do the baptism in blood first at government house, then at the Democrat party HQ, and only finally at the home of the Prime Minister.  At 4 pm, the should have been on the other side of town.

Sure enough, by 5 pm they were gone; apparently it was just a small subset of the protesters that had got their schedule in a muddle.  What was I to do?  The choir practice was already cancelled, and if I un-cancelled it, what would happen if the blood-spatterers managed to synchronize their iPhones and burst into my neighbourhood in the middle of Rossini?

Well, judging by average traffic, the protesters should be here by now, but I've just heard that they're not coming until 7 am.  Meanwhile we did have a brief rehearsal with a few who came despite everything, and that small group got a handle on another piece of the Rossini, so it's moving along.

By the way, the papers have been greatly at variance about the amount of blood that actually managed to be squeezed from our gullible friends from the country: estimates ranged from 10 liters to 300.  None of the amounts actually came close to the 1,000,000 ml that has been rhetorically demanded.  Just as well.  The Red Cross is screaming for blood donors.  Let's not waste another drop.  (This is another plug for my campaign to save someone's life, not someone's fortune, by donating blood....)

The authorities didn't use magic lustral water from the Emerald Buddha temple to exorcise the blood as recommended by the astrologers' association; instead, they used chlorox.

Tomorrow, it seems, I'm going to wake up to the smell of bleach....

Inconvenience will turn to Catastrophic Inconvenience, I am sure once, once the western press against recasts this sorry tale as a battle between the downtrodden and the elite.  I've got fifty tourists flying in to perform with us at their own expense -- pouring a few million baht into Thailand's economy -- in two weeks, just the kind of person the Ministry of Tourism loves, and symbolic of all we are working for to raise this country's image as a haven for cultural tourism.  If they see what is bound to be sensationalist and distorted coverage of what is happening here, they'll probably end up flying to Cambodia.

Which may be exactly what Cambodia's high-profile new economic advisor has in mind.
Posted by Somtow at 1:46 AM