The Calm Before the Calm 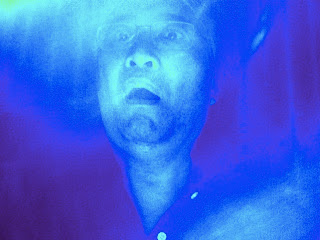 It's now been twelve hours since the red shirts announced that if the government doesn't resign, they're going to go on a rampage.

They've already done some terrifying things, like performing a ceremony in front of the statue of King Taksin in order to put a curse on the government, armed themselves with plastic bags of shit and rotten fish, and had their leader appear by satellite link to swear that he's not in Cambodia.

Presumably, the rampage is going to be a little more serious than the above examples, and yet for some reason I can't feel that much terror.  Maybe it's because I have lived through a lot of political upheaval in my day.  I was in Thailand in the 70s, when there was a coup every October.

Estimates of the ravening hordes have been at about 100,000 to 200,000, somewhat short of the one million that was threatened, but the Bangkok Post says that  someone who actually counted said it's only about 46,000.  That's a lot of people all right, but it also seems to show how little money can buy these days.  I'm sure the Shinawatras are complaining bitterly about how you can't get decent help these days.

So, I spent the evening watching a Spanish film about Hypatia, the Alexandrian astronomer, philosopher and feminist icon who was (legend has it) skinned and burned alive by a mob of Christians in the 4th Century.  Though by no means a great film, it certainly brought a sense of perspective back to my life.  Hypatia once presented her suitor, the future governor of Alexandria, with a used sanitary napkin to illustrate the dark side of the human condition.  Now that is style.

I just received an sms from Jay's school saying that they will not be closing tomorrow.  Ah well.  In New York, kids may yearn for blizzards so they can stay home from school, but in Bangkok, they earnestly pray for revolting peasants.

In about twelve hours comes the deadline for rampage.  I can't stay indoors: I have a big meeting on the other side of town.  Once again, if I do get skinned alive, I'll be sure to tweet.
Posted by Somtow at 12:23 AM