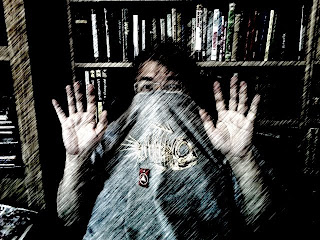 As I predicted, everyone from my mother to the maid has simply assumed that the rain that deluged the blood-spatterers at the gates of the prime minister's house was a direct divine intervention in the affairs of Thai politics.  The idea that it could simply be a cosmic coincidence has never occurred to any of them.  Unless you understand this, you will never understand Thailand.

Water is at the very center of the Siamese worldview.  Before there were roads, there were waterways.  The alluvial-rich central plains have enough water for two rice crops a year and are the heartland of the establishment; the drier northeast can only sustain one crop a year, and is the heart of Thaksin country. It is an inequity that goes beyond money, and money alone can't fix it.

Right now, it's still the dry season: the rain that descended on the red shirts was therefore unseasonal.  By definition, therefore, it was providential.  There it is.

The red shirts have presented a letter to the U.S. embassy demanding an explanation for the rumor that the CIA (or someone) told the government of a plot against the prime minister's life.

This is, I think, another example of irrational thinking.  First, although foreign governments have been mentioned, I don't think anyone in this government actually stated that the U.S. was informing them about murder plots.  It's a rumor built on a speculation built on someone's ambiguous remark.   The U.S. government, quite rightly, refused to comment.

But wait a minute ...  If I were the government of a friendly nation and I learned of a plot against that nation, wouldn't I give them a heads up?  If the Thai government had intercepted a secret missive from John Wilkes Booth, wouldn't King Rama IV have immediately despatched someone to tell Abraham Lincoln?  (Preferably not Deborah Kerr.)  Would a million sore losers from Dixieland have marched on the Siamese Embassy in Washington and pelted the ambassador with ham hocks?

WIth the blood ritual not having created quite the right sense of shock and awe, they are now planning to march randomly around Bangkok on Saturday.  Causing a severe traffic jam, apparently, is now the latest strategy for bringing down the government.

A few days ago I proposed a far simpler way of achieving the red shirts' goal: persuading a couple of small parties to switch sides in the coalition.  Politicians may cost a lot more than 500 baht apiece, but you don't need to buy them 100,000 at a time.

Today I will also propose a simple way for the current government to prevent future red shirt invasions.  Over 50% of the electorate is functionally illiterate.  (I got this statistic from some professor on a late night talk show, and I bet it's true.)  Take Thaksin's 46 billion baht and give them a decent education.  Stop underestimating them and they will surprise you.

There is in this country an enormous gap, financial and cultural, between city and country.  This gap has been heavily exploited by the architects of this protest, but, contrary to what the western press seems to think, it is not what this present struggle is about.

It is in fact an incestuous war between two elites: an old-style, gentlemanly elite and a flashier, no-holds-barred elite.  The poor have been duped into serving as collateral damage.

The actual  struggle, the one to narrow the gap and to bring the entire kingdom into the modern age, has not even begun to be fought.  We must give it time.  To demand all the results immediately would be to insist that Magna Carta, the Reformation, the Restoration, the Industrial Revolution, and the New Deal all be squeezed into about fifty years.
Posted by Somtow at 2:39 AM