Birth of an Orchestra 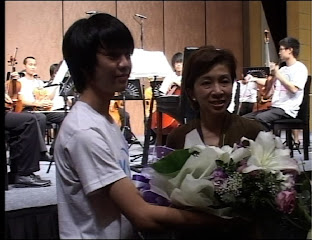 Jay receiving flowers from the Executive VP of Siam Commercial Bank after the premiere of Aldebaran
From today's THE NATION ... I suspect that from the words "Last Week" they must have held this piece for a while owing to a few slightly more newsworthy happenings in Bangkok....
BIRTH OF AN ORCHESTRA18-year-old  composer’s astronomical creation highlights youth orchestra’s debut
The Siam Sinfonietta, a new symphony orchestra considering entirely of teenagers, made a splashy debut last week with concerts at Rajabhat University in Korat and the Mahisorn Hall at SCB Plaza in Bangkok.  Both events played to full houses and featured ambitious programming including two complete symphonies.


The orchestra first came together in March as a result of a widespread talent search by Somtow Sucharitkul, whose “adult” orchestra, the Siam Philharmonic, has been getting a lot of international attention lately for its bold programming and ecstatic musicianship.   But auditions and scouting had been going for at least a year beforehand.  At the “Bach to the Future” camp, a symphony orchestra was forged after three intense days.


“It’s a new approach to education,” says Somtow, “geared towards the most highly motivated, creative and talented young individuals in our society, who often find themselves stifled in an over-regimented teaching environment.”  A visit to a rehearsal finds Somtow touching on aspects of philosophy and music history more commonly found at an advanced university level.  In the middle of the famous first movement of Mozart’s 40th Symphony, he stops to ask the kids, “What key are we in?”  Winry, a lanky 15-year-old cellist, scratches his head  “F sharp minor?” “Right,” Somtow says.  “Why is that important?  What is about F sharp minor that is so shocking?”  “Because …” Jay, in the first violin section, stops to think, “it’s as far as you can get from G minor.”  “That’s it!” Somtow says.  “Mozart’s jolting the audience.  He’s saying, ‘Here we are, adrift, lost, far from the home key … and daring us to find our way home.  Now do you understand why it’s pianissimo?
The kids have been listening in a way you rarely see kids listen in a classroom.  He picks up his baton.  The development section of the movement begins.  It’s hushed, magical.
“Kids can play real music,” says Somtow, “with all the passion and intensity of a world-class orchestra.  The technique may not be all there yet, but they will learn it.  But they won’t play that way for you unless you respect their musicianship and show them how the act of creation is coming from them.”
In Korat last Sunday, and again on May 4th in Bangkok, the Siam Sinfonietta played with a maturity and sense of style not often found in Bangkok even in adult orchestras.  The programme contained two entire symphonies: Mozart’s Fortieth and what may have been the Thailand premiere of Haydn’s 83rd, “The Hen.”  Intonation was above average and sforzandi were crisp.   The Mozart was played with such radiant intensity that it led recording engineer Prateep, who records almost all classical concerts in Bangkok, to remark that it was “the best live No. 40 I’ve ever heard.”
Highlights of the concert, and showing that this is no ordinary youth orchestra, were works by Charles Ives (The Unanswered Question) and the world premiere of 18-year-old Jay’s minimalist composition Aldebaran.  This colorful, sci-fi flavored piece, while clearly showing the influence of Phillip Glass, had its own unique tonal flavor and was at times startlingly original.
This is a very special orchestra which benefits from the attentions of internationally known musicians such as Somtow and Bruce Gaston (under whom they worked at camp in March) as well as coaching from Thailand’s top instrumentalists like Siripong Tiptan and Lertkiat Chongjirajitra.
The Siam Sinfonietta will soon be featured in a weekly reality show from the new @home channel on Truevisions and is planning regular concerts and tours both in this country and in exchange with other youth orchestras in Europe.
The Sinfonietta is still auditioning for a few daring and highly talented young musicians, especially in the string section.  Committed young musicians (age 12 and up) should contact K Pongsatorn, orchestra administrator, at orchestramanagerspo@gmail.com, tel (081) 498 8864.
Posted by Somtow at 10:29 PM