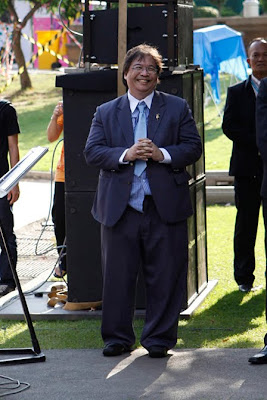 Tomorrow it will be the second anniversary of HRH Princess Galyani's death, and as of now, I am still composing the Requiem, which is supposed to have been completed a long time ago, and performed already, and so on. As with any labor of love, it just does not seem to turn out neatly. I have composed virtually the entire piece and it could perhaps easily be performed as is, without the final movement. After all, most requiems don't even include the "libera me" and "in paradisum" sections ... and this is what I have stalled over for months, composing an average of a minute's music a month for the last six months.

The reason I am writing them at all is that, two years ago, when I was starting the piece, I sat with Brother Martin at ABAC and he said to me, "Somtow, you must not forget to set the libera me section of the requiem mass." I realized that I had a unique opportunity to create the first setting of a major piece of Latin liturgy by a Thai composer. Maybe that's a rather retro thing to want to do, half a century after Vatican II, but I've always had a powerful streak of retro: why else am I trying to revive the sonnet, put on concerts of Dufay, and set long bits of Latin to music?

Those who have followed the saga of my Requiem pro matre musicae perhaps know it's been a painful process. One movement from the piece, by far the smallest, has had a bit of a life as an excerpt. having been played at one or two memorial concerts for the princess, but this work. created specially for the space at the huge ABAC cathedral in Bangna which is a sort of scale model of St Peter's Basilica in Rome, has just kept getting bigger and bigger, so that parts of it now require something like 200 - 300 performers, including seven soloists, off-stage brass band, two boys' choirs, a large mixed chorus, and an orchestra with an organ. Although most of it actually feels like chamber music.

This is the requiem of which one movement disappeared completely in a hard drive crash and had to be reconstructed completely out of thin air, not once but twice....

The requiem is also my personal "Monteverdi Vespers" in that it's a compendium of every technique I've ever used from neo-romanticism to serialism to neo-Asianism, and it's a real attempt to reconcile all the different creative strands in my music. And that final coming together happens in the last ten minutes of the piece, which it's all been building towards and that's why it is such an angst-ridden bit of composing.

But I've suddenly turned a corner. Suddenly I see how the end is going to have to be. It must have just taken this long to figure it out. Not used to this. Now I'm composing up a storm. It might even be finished in a matter of days....

In which case, it will be the my first composition to take over two years to compose....
Posted by Somtow at 2:14 AM