Time considered as a helix of maxed-out credit cards 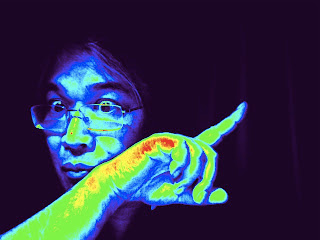 So, for the last few days, everyone in my house hasn't known what day it is, and it all came to horrid collision of timelines and timeframes this morning.

I'm just running off to Singapore this morning for only 24 hours, the idea being to catch the opening of "Boheme" with Nancy and to be able to have another chat with Covent Garden resident director Andrew Sinclair who has offered to do a production of Jenufa in Thailand in 2011.  While I'm there, I was going to take Jay to see the NUS music school as well as perhaps pop in to see a bunch of flayed corpses at the Body Worlds Exhibition.

So I get to the airport at the time it says on the E-ticket and I ask the counter why the plane is leaving an hour earlier now.

She says, "You missed your flight!  It was yesterday." It seems that wrong-day-itis has afflicted the entire family.

Time for a split second decision.  Should I buy a new one way ticket?  If it was just me I would have turned around and gone home.  The hotel in Singapore is already paid for but it's deeply discounted, I got it mostly on award points.  It's not like I've never seen "La Boheme" before ... I just conducted it last month and I'm doing it again in August!

But there's also this other kid travelling with me and Jay, someone from Jay's school.  His dad bought his plane ticket.  I can't really send him to Singapore alone!  So here I am, an hour late for check-in, having to decide whether to stay or go.  If I spend the extra $400 on a ticket, will my credit card become suddenly maxed out so I have to hitchhike to the opera in Singapore?  I decide to get the money from the ATM and call someone to quickly deposit more money in this account so that by the time I get to Singapore in two hours I'll have enough money for lunch.

I realize that today I'm like the protagonists of "La Boheme", rushing through life without knowing how I'll pay the next bill.  Maybe, having achieved all these supposedly big-time distinctions, it's time to settle down to a nice boring teaching job in a quiet rural conservatory.