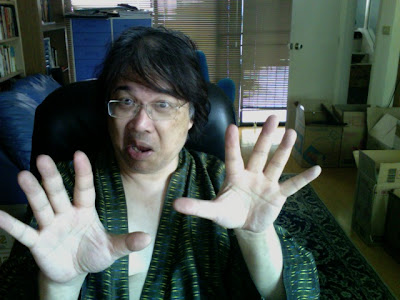 'oi varvaroi na fthasoun simera.
Or words to that effect.
The barbarians are coming today.
Am I worried?
Not really.
Maybe they won't come until tomorrow.
Dec 2 looks like a big day; the ruling party of Thailand might be kicked out of power by the judicial process.
However, I am too busy composing and moving my office to really notice what is going on....

I have now returned to one of my "ancestral" houses, a townhouse originally designed and built by my mother years ago. It's being retrofitted to encompass the thousands of books, CDs, and DVDs that were originally spread out all over the 7-bedroom rented house we used as the Bangkok Opera offices. Moving into this space is hell but this time I will probably stay put. Adding the additional space makes my home into a sort of rabbit warren, perhaps a little bit like Harlan Ellison's house which keeps growing in weird organic ways.

An interesting Freudian slip in the website of The Nation, I think, sums up the entire insanity of it all. Basically, the Telegraph has named Thailand one of the "most dangerous places on earth" (though I am not quite sure what criteria are being used to make this claim.) The headline in the website blares out this sobering piece of news, but in the body of the text, the newspaper states instead that Thailand has been voted one of the most "generous" places on earth...