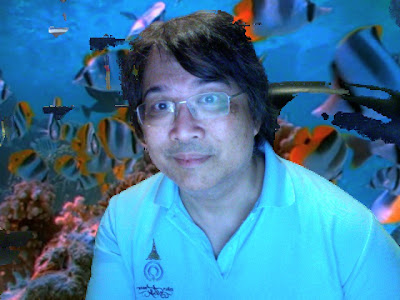 Many years ago, I was invited by TAT (The Tourism Authority of Thailand) to serve on an advisory board for what looked like an exciting new film festival. So, of course, I made a point of asking my friends in Hollywood "high places" about the international partners who were coming on the project. What my friends told me was that there might be something fishy about some of these people, so as part of my duties as an advisor, I thought I had better send a private and confidential email to the governor of the TAT to let her know that she should be careful.

Shortly after this email, I found myself shut out of everything to do with the festival, and indeed heard many rumors that things that subsequently went wrong with the festival were being blamed on "Somtow's big mouth". Rather surprising since my note was completely confidential and not designed to be shared with anyone. The governor stopped taking my calls and a two million baht grant from TAT to the Bangkok Opera, already promised and already worked into our budget (indeed, we had been told to go ahead and use their logo on posters) mysteriously failed to materialize. As has frequently happened to me since returning to Thailand, my honesty, good intentions, and attempts to make our society more open and self-aware were being severely and vindictively punished, and for no real reason, since what we were doing was beneficial to the country and would have reflected well on the grantor.

I was therefore not very surprised, but deeply saddened, to read all the news about alleged malfeasance and corruption during that administration. However, I absolutely have to say this, and will swear to it in any court: our foundation recently received a grant from the new, post-coup administration of TAT. And although there were numerous problems with timing and red tape, at no time was I ever solicited for any bribe. It was never intimated by anyone that any under-the-table payouts were expected. Everyone, from the Minister down to the lowest official we talked to, was concerned only about the money being spent in ways that enhanced Thailand's image as an international cultural destination.

As you know, I have never hesitated to criticise our government (or any other government) when it oversteps its mandate. However, my recent experience with this ministry on this occasion has been one in which they may have been inefficient, but not at all corrupt. My frustrations were always to do with timing and paperwork and never about honesty. My conclusion is that Dr. Suwit and his minions are doing a heroic job cleaning out these Augean Stables, and I hope that his blood pressure can take a couple more months of this....

I'd be interested to know if anyone else has dealt with TAT recently and whether there are stories to share about the new administration versus the old one.
Posted by Somtow at 2:57 PM