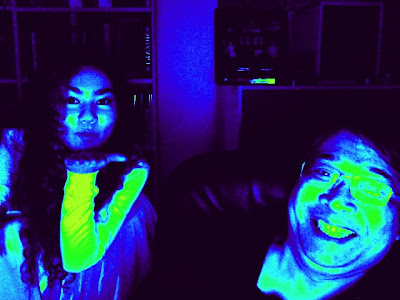 While tourists were being clubbed by cops not too far from the Holiday Inn in Macau, I lay around watching CNN. And it was there that I learned that the Catholic Church has been urging that we all shun the new film of Phillip Pullman's Northern Lights, known to some as The Golden Compass. Naturally, I wondered how an alternate universe fantasy novel populated by non-humans could possibly pose a threat to the might and majesty of the Catholic Church, so I decided I'd better fill a lacuna in my encyclopaedic knowledge of the field by running out and buying the book, which was oddly enough one of the few books in English that was for sale at the Macau airport.

Finishing the novel as my plane landed back in Bangkok, I realized that this trilogy is the real thing. How could people have slogged their way through thousands of pages of Harry Potter novels when such gems as this are available?

Take "back story" for instance. Recently, J.K. revealed that Dumbledore is gay. Now this is a wonderful example of the iceberg theory of literature. But for the iceberg to, as it were, hold water, you actually have to plant some kind of glimmering shadow of a hint somewhere in the text itself. Revealing the subtext at a public gathering is really, in a sense, cheating.

Pullman, on the other hand, doesn't cheat. For instance, in the second book he makes a passing reference that in Lyra's world, "anbarics" is a term that more or less corresponds to electromagnetics in our world. The characters then do a bit of folk etymology, relating anbar to amber (thus to electrum, which means amber) and so on. I bet it never comes up again (I'm reading the third book while editing the video of Die Walküre).

This is just casually thrown away, and yet there must be one or two other people in the world reading the book who happen to know that "anbar" is also Akkadian for iron. The symbol for "Anbar" was used by the Hittites (in the manner that the Japanese use Chinese symbols as kanji) but we don't know how the Hittites pronounced it. I happen to know this only because of some research I once did for a novel set in the Bronze Age.

Because this word is alluded to by Pullman, there is, in consequence, a huge submerged iceberg chunk of lost history and prehistory, about what exact point in the past the worlds must have diverged, about linguistic speculation, about Indo-European societies, etc. etc. All this hinted at so cunningly that I'm probably the only person within a thousand miles to have glimpsed it, which means that there are a thousand other hints that I did NOT get because they involve some arcane piece of knowledge I happen not to possess.

Well, after that I decided to see the movie and while I admit that it is has been dumbed down a lot, it still manages to convey the richness and strangeness of that universe pretty well. So I'm a bit distressed to hear people prophesy that it will mean the end of New Line and all that. I think that maybe they should have not dumbed it down at all, or conversely dumbed it down to nothing (the fate that befell The Neverending Story). What I didn't see was a blatant attack on the Catholic Church. For that. you'll have to look at Ken Russell's The Devils or any movie about Joan of Arc....