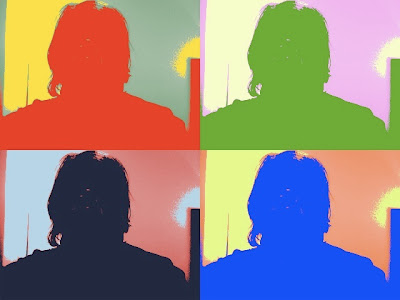 Yesterday I staggered away from the quagmire of the Bangkok Opera Admin to spend a few hours at Narong's Composers' Festival. I intended it to be a quick in-and-out because I was barely awake even before I left, but it ended up as a rather inspiring experience. Although there was hardly anyone there, they were the right people.

It seems that people never tire of my geriatric war stories about the "bad old days" ... which, by the way, are also seen as a Golden Age by some! In fact, when I saw the Taiwanese composer Hsu Po-Yun last year, he said, "Oh, Asian composers these days ... it's hideous now ... it's all politics ... the old days were so exciting ... we were young, we were going to change the universe...."

So yes, I gave my little talk about all that, and then it came to talk about the present. So I did the whole spiel about how I've now become the Poster Boy for the "Oh, how dreadful music politics is in Thailand" chorus, and how this has been wildly backfiring on the "Let's Slander Somtow" crowd. People found all that quite entertaining. These war stories are entertaining, aren't they?

So last night, gave a smaller dinner to which Robert Markow came. He had actually flown into Bangkok to see my Wagner; when it was postponed, he decided to come anyway and hang out with friends. Catherine came, Anette Pollner came, and the amazing Kit Young, who is the legendary patron saint of classical music in Burma, popped in as well. It was quite a remarkable evening in which everyone was gossiped about, from the highest to the lowest.

In the two dinners, both with other composers and many visionaries present, I learned a lot about how other creative artists see the world. For instance, I learned that Bennet Lerner had, like me, had "aural hallucinations" in a Thai monastery while spending time as a Buddhist monk. His reaction to it was one of annoyance when his abbot told him that it was all maya, all illusion, and that he should dismiss it. I didn't tell my abbot about it, so perhaps I escaped with the idea that it could be a profoundly spiritual experience. I also met John, the composer who lives in Singapore and who is doing an opera about the creation of the State of Singapore. What a politically complex, not to mention dangerous, idea! We both traded stories about offending the censorious powers above and how to handle them....

I don't think I can anticipate much sleep until the weekend.
Posted by Somtow at 2:43 AM