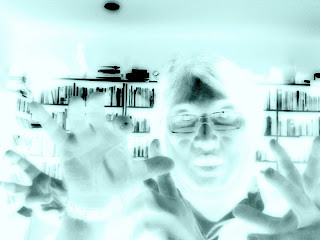 Speaking to the Gods is a peculiar thing, but when they speak to you, it can get even weirder. This is especially true if, on some level, one feels oneself to be, on some level, a doubter. Whether they are manifestations of the collective unconscious, or even merely aspects of oneself who have somehow become personified, one can never entirely explain it away; one is always left with a bit of magic in the air, a glint of fairy dust.

Most of my friends know I've been in something of a depression since last December. It's perhaps partly natural after such a huge production as "Ayodhya" ... the fallout from the little censorship debate never seems to cease ... and then there was all the hate mail. But mostly I suppose what depressed me was the fact that I've dedicated almost seven years of my life to the cultural awakening of this community, only to be attacked as a venal monster by some of the very people whose careers were made possible by my efforts.

At first I thought that the only solution to all this was going to be to become completely evil ... go over to the Dark Side... as did Anakin Skywalker. But a solution did present itself and it came from the still small voice of Ganesh, patron of poets.

Well, I have a very special Ganesha statue in my house. Years ago, I saw this beautiful 14th century statue in an antiquities auction catalogue and I was drawn to it. I knew I could never afford such a rare piece but half jokingly I put the minimum bid on it and sent iit in. I did not get the statue of course; it went for much more.

Months later, however, I received a call from the auction house in New York. The winning bidder's check had bounced. Something else was wrong with the next bidder. And so on down to me. It was clear that this statue wanted to reside in my home. (The lady on the phone from the auction house began going on and on about one of my books, too, oddly enough. She had actually read one.)

When the Ganesh arrived, a Bengali friend of ours immediately went into a strange sort of trance, claiming that she could feel that her ancestors had stood before this very statue. She swayed and babbled in a way I'd never seen before. And things began to change around the house. It was around that time that music returned to my house. Around 1979 I had left Bangkok in a funk, completely burned out as a composer. Of course I had then gone on to have an entire career as a novelist, but something was missing. In the old days, there was music playing in my house 24 hours a day ... LPs stacked up on the record changer, a classical radio station ... but there hadn't been music in my house for a decade. I had stopped listening. But when the statue arrived, music came back as well. I composed the ballet "Kaki", and eventually went back to opera; miraculously, I found that I still remembered every note of every opera I had memorized 20 years before and not thought about in all that time.

When my Ganesh was shipped back to Thailand, we would sometimes bring out the statue on Wednesday mornings, present offerings and so on. On one occasion, Trisdee was playing a Haydn sonata. The housekeeper went into a wild trance, murmuring and singing in what appeared to be Sanskrit, and dancing around the statue, weeping incontrollably, and finally vomiting in the kitchen sink. Our guests, sober members of the Dutch opera studio, had of course never seen anyone be possessed before, so they immediately whipped out their mobile phones and started to videotape the proceedings. When it was all over, I asked the maid (who is a muslim, so getting possessed by a Hindu god is quite a trick!) what it was all about. She said, "You forgot the sugarcane." It's true. The offerings had not included the customary sticks of sugarcane. She then added, "Play some Indian music. He doesn't want to listen to that. I put on a CD of Shobha Gurtu, drowning out the Haydn. The housekeeper then calmed down.

Being a vessel for the gods may have its advantages, but this particular maid didn't last too long at my house; she left shortly thereafter.

Humor aside, it is a Ganesha statue of immense power. Because since settling into my home, it has been a magnet for high creativity. I've managed to compose more music than in the last twenty years put together and it almost seems like taking dictation sometimes. And then all these great artists seem to feel nurtured and comfortable in the statue's vicinity and so we've had dozens of them come through our doors.

Ours is a Ganesh of creativity, not of financial gain. We've had years of incredible artistic achievements and have ended up in quite a financial crisis. I decided to ask the God to give me some pointers about balancing creativity with survival. And so it was that I a dream. (One of those "waking dreams" -- I've only had them a few times in my life, most frequently during my time as a Buddhist monk." ) It seemed to me that Ganesh spoke to me in a voice somewhat like that of a small boy. The playful Ganesha is always the one who resonates with me the most.

This is what he said. "You will never get money by going after money directly. It is not your nature to attract money. But money will come by sharing the creative spark that I have awakened in you." He said, "In your world, too many people think only to profit from creativity and inasmuch as they do so, creativity begins to die." Ganesha then instructed me to use a few particles of the dust from the powerful ancient sculpture, say a mantra of blessing and blend those particles into the material to make a number of amulets. He said that the amulets would be like windows through which creative energy can flow into people's lives. He said that the money raised by these amulets must go only into creative enterprises: singing, dancing, poetry, and music. He said that those who hold the amulets, if they make their hearts pure and their minds open, will also open themselves to his creative power.

This dream, replete with playfulness and irony, has to me all the hallmarks of "truth" (insofar as we humans can perceive truth.). The shortest path to what we desire in life is often not the obvious road, but another. Therefore, though I am in many ways a skeptic, I know that power resides in words and in images.

As skeptics go, I seem to have more supernatural experiences than most believers....
Posted by Somtow at 1:03 AM