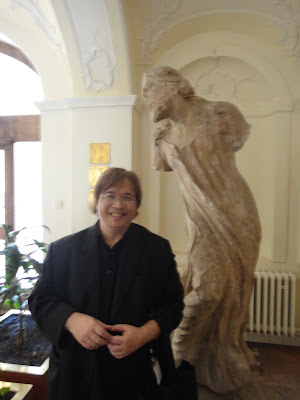 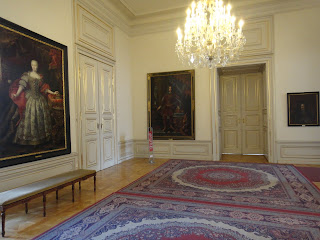 It's Friday and I'm still in Bratislava; this morning I listened to a demo by two of the choirs who will compete in tomorrow's competition.  The Singaporean children's choir sang Chinese and Filipino pieces as well as "Turkey in the Straw."  This is a picture of the site of the demo, a place called "Mirbach Palace" which contains many art treasures; I would include a photo of a gorgeous large painting by Veronese, but unfortunately they didn't allow photographs. 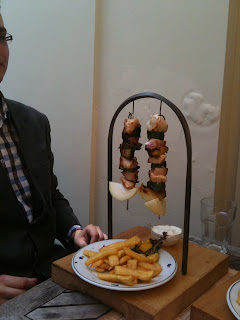 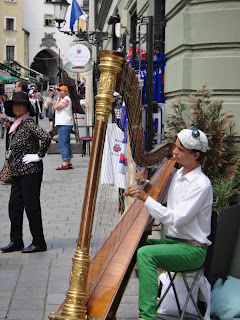 After the mornings demo they treated us to a lengthy lunch which stretched for hours.  The food was enormous and a street harpist serenaded us with selections from Andrew Lloyd Weber.

Our friends' concept of a light snack is very much in line with how seriously they all take their meals around here ... and lunch lasted virtually until dinnertime, when we continued with a concert by the Slovak Philharmonic, a rather exciting night with a Shostakovich cello concerto and a Bruckner Symphony ... front row seats for two for the princely total of 12 Euros.  James Judd conducted and this was an exemplary concert such as could have been heard in any of the best halls in Western Europe (for a lot more money.)  Compared to last night's opera, which was fairly run-of-the-mill, this was an extraordinary concert.  I realized that there's a profound difference in priorities in Bratislava and Bangkok: in Bangkok you can get a street meal for 50 baht, but great seats to a Mahler symphony cost about 1000; here a street meal is EU 12.90, but a single ticket for a Bruckner concert is 8 EU.  Pretty interesting.  It's not simply supply and demand.  It's a whole way of life.

The Shostokovich cello concerto is one of the hardest works ever written for that instrument, including a lengthy (indeed almost interminable) cadenza which, on CDs, merits a separate track number as it's like a movement of its own.  Eugen Prachac, a Slovakian cellist, did very well and sitting right beneath him as we did, we could hear his dramatic breathing as a plangent counterpoint to Shostakovich's angst-ridden passagework.

Although inspired and moved by the performance of Bruckner 5, however, I realized it wouldn't be the idea work with which to introduce Bruckner to audiences in Thailand.

Bruckner composes in monumental blocks which are not at first hearing connected to each other, something his own pupils desperately tried to "correct." 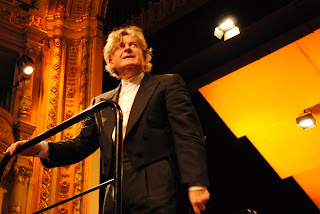 The Fifth might appear disjointed to listeners new to it and therefore I've been thinking that we'll introduce Bruckner with the more accessible No. 4,  or perhaps the incredible No. 9 which though gargantuan, has the pseu-advantage of being one movement shorter by virtue of being unfinished.  We'd also be able to use our Wagner tubas, sitting around unused since Walküre.
So finally came the competition ... less one choir, because it seems that a member of the Filipino choir was caught smuggling an illicit substance, and the entire choir was sent back to the Philippines.  Oddly enough, a Filipino song did win the competition ... sung by a group of Singaporean children.  Here's a tense moment in the judging and ... here is a jollier picture of the Singaporeans probably rejoicing in their 98% win.... 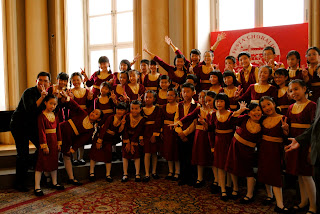