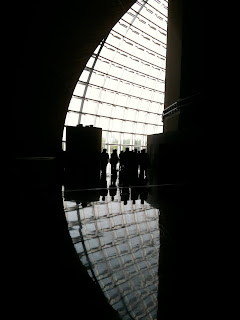 The level of attention paid to us was astonishing.  I had my own personal assistant, a very helpful young man named Zhang Ye, who told me had been on the security team for HRH Princess Sirindhorn during her recent trip to Beijing. I was escorted everywhere, my every need anticipated ... if there was a flavor of Big Brother here, it was soft-pedaled ... but let's just say I couldn't even go to the bathroom without a friendly smiling helper at my side....  Arriving desperate for a meal, I ended up going with the hotel's version of Hainanese Chicken Rice ... comfort food in an alien world. 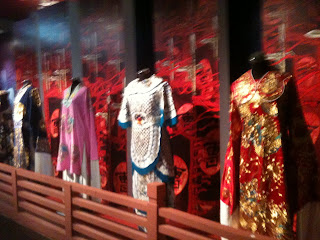 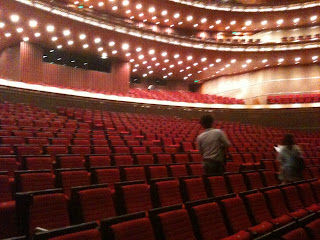 Now, this National Center for the Performing Arts is absolutely staggering.  It doesn't have the gaudy "chinoiserie" of some late Empire art ... it goes all the way back to the purity of form and sweeping lines of the art of the Song Dynasty in my opinion.  The building itself is in the shape of a gigantic yin-yang, so it speaks to us of the balance of the cosmos. It has an opera house, concert halls, regular theatres, recital halls, and all sorts of nooks and crannies, as well as a lovely Chopin exhibit.

On the way to the NCPA I met my colleagues for the first time.  I think we were all a little disoriented (except of course for those already working with the Chinese on coproduction.)  I soon saw familiar faces, though.  Toh Weng Cheong of the Singapore Lyric Opera and Warren Mok of Hong Kong were both there, as well as one of best friends, soprano Nancy Yuen.

We were escorted to an impressive opening ceremony, where Lorin Maazel gave a speech denouncing Regietheater and the dignitaries of the NCPA, such as Chen Ping, president of it all, were present.  Then came the first entertainment of the weekend, a performance of Traviata in the new hall which certainly showed off all of its technical specs to great advantage, though some of the western opera company heads were less than enthralled about its musical aspects.  Nevertheless, this was an ambitiously designed production and gave us a great taste of what the NCPA is capable of....

I'll try to catch up on this narrative tomorrow.
Posted by Somtow at 2:01 AM