Bach to the Future 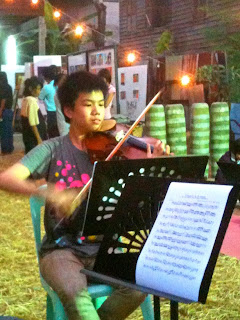 To speak about connecting with my roots is always awkward because in a sense, I have  no roots.  Or perhaps it can be said that I have many different sets of them, or that, like a banyan tree, my branches have frequently taken root in an alien soil.

So I can’t say that my second visit to Korat is about the rediscovery of my roots.  It’s not that simple.
It has been as much about planting new seeds in ground that might be fertile or stony.  As when three members of our Shounen-Thai Quartet sat in the middle of a field and started playing the slow movement of Bach’s double violin concerto amid the sights and sounds of what called itself the “Kollywood Festival” but was for all intents and purposes a temple fair without the temple.  Next to them, a street vendor sold homemade dim sum and another touted that fabulous oriental delicacy, French fries (served up in a little banana-leaf boat).  Behind them, a woman demonstrated the ancient art of weaving on a hand-loom, while in the distance a vendor hawked battery-operated light sabers.  A folk opera jangled from about 200 yards away.  Yes, it was noisy, and yet … around the Bach there was a sort of aura of stillness.  And people were stopping to listen.  And they were really concentrating on this ethereal music with its slow suspensions, its aching long notes.  So the idea that this might be the first time this piece of earth was being touched by Bach was very moving ... it brought me to tears ... the innocence and purity of the moment ...
The quartet isn’t even going to be all here until tomorrow, when Post, our viola player, shows up with his mother.  Then they’re going to have a session with some local young musicians, exchanging ideas and being teenagers.  In the evening, they will join forces with a traditional Korat singer.  We have no clue what is going to happen, but I am sure it will be magical.
My American friends often assume that I come complete with “mysteries of the east,” but I left Thailand when I was six months old and didn’t come back until I was 7, and then only for 5 years.  I am as European as I am Asian.  Not to mention American. Indeed, I can truly say that I am a child of three continents.  In Thailand, I frequently am seen by Thais as being too much infected with the “mysteries of the west.”
As a Thai, I’m a city boy, whose childhood came with walled enclosures and imported foreign bland food.  So I never lived in a village, never ate duckbill shishkebabs, never swam naked in a muddy stream.  I’m having a lot of trouble with the local food.  And yet … there is something about this that calls to me from a past.  It can’t really be my personal past, so it must be something from the collective unconscious.  I’m connecting with a past that I might have had.  Yet it feels as real as if I had really lived it.  Like a good novel, I suppose.
Posted by Somtow at 2:57 AM