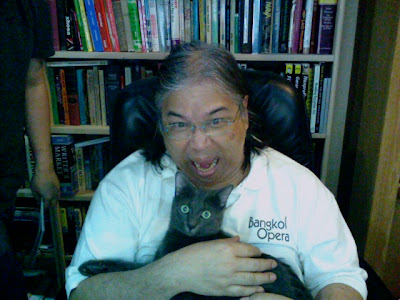 It's been a time of dire omens. Before Thaïs opened, a moth the size of canary hovered over the coffee machine. There was also a dream about lions, bears, and tigers. Then there was the discovery of the ancient cat dance, reproduced below,.

According to ailurochoreographic expert Richard Henderson, Despite the co-performer's sub-continental accent, I thought I detected elements of both sub-Saharan African and (especially) Polynesian influence in different strata of the performance. Given the very early separation of the African and Polynesian populations in the eastward drift (via the sub-continent, of course), this would seem to suggest a very early origin for the dance. Further (expensive) research is clearly required. It's so nice to be taken seriously for a change.