The Helix of Semi-Precious Stones 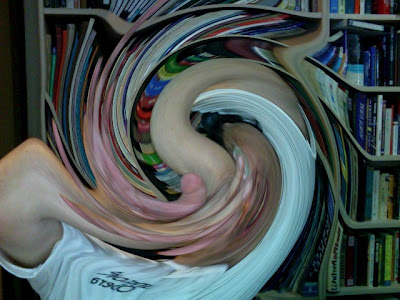 Last night was the night after Trisdee's "farewell to prodigy-hood" party. So I was with a different group of guests ... this guy Stan from the Mahler Society, and a lady from Bulgaria, who were all enjoying Black Russians from Trisdee's bar in Trisdee's absence.

As we sat discussing the meaning of life and other such trivialities, the sound of Chopin's Etude in A flat (the "harp" one) came floating up to my living room. Everyone looked up at the same time.

"God, Jay sounds brilliant," someone said. That would indeed have been the case, as Jay has only been playing the piano for a short while although he has tried sight-reading the etude before.

"Wow," said another guest. You can tell the pianist just from the sound?

I didn't tell him it was the only recording of the etudes in my library. I merely smiled knowingly.

At that moment, however, an excruciating wrong note rent asunder the perfect equilibrium. I realized that it wasn't, after all, memorex. There was someone sneaking around down there ... but surely a burglar wouldn't stop to rattle of a rather difficult Chopin piece.

It turned out to be Thailand's world-famous Bruce Gaston who had come to Trisdee's birthday party ... a day late.

And a dollar short?

It makes me wonder whether time is not, as previously supposed, either linear, or cyclic, or curved, but rather a series of slightly overlapping tectonic plates, and whether our lives slide by each other in a cosmic continental drift, only accidentally intersecting....
Posted by Somtow at 9:59 PM