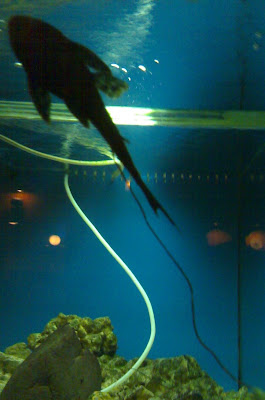 Politics as usual in Thailand today, with prime ministers slipping in and out of power, getting busted for cooking, and so on. At least they lifted the state of emergency, though it must be admitted that it wasn't much of one.

The boredom of politics was temporarily alleviated over the weekend by the biggest orgy of Cajun cooking I have ever experienced. There's this guy Doug, who owns a Cajun restaurant next to a transvestite cabaret, about a mile from my house … (yes! We're in Thailand!) and to celebrate the 22nd birthday of the restaurant Doug put on an all-you-can-eat spread with every conceivable piece of New Orleans home cooking one can possibly imagine ... for six bucks. Believe me, you cannot get this in New Orleans. Not all the etoufe, jambalaya, gumbo, prime rib, bbq, shrimp, oysters, pecan pie, etc etc etc you can eat for six bucks. The ability to eat a vast and authentic Cajun meal at this price exists only, as far as I know, in Bangkok. That's why Bangkok is the true center of the universe.

With Trisdee in Holland and missing all the fun, Jay and I spend the evening eating and watching a curious phenomenon: a shitting fish.

The tank was right by our seat and it was difficult to ignore the fact that our piscine friend was having a lot of trouble dislodging an extremely lengthy faex. Indeed, it was longer than the fish itself and it was therefore a curious irony to be stuffing our faces whilst observing the extrusion. We were taking bets on whether the fish would be able to shake it off, but it couldn't. A gaggle of shrimp were hovering nervously below, perhaps waiting to catch the morsel if it fell.

From this, I believe I have learned a valuable lesson in life. That fish, thrashing around trying to free itself from its own excrement, was in fact a trenchant and profound metaphor for the human condition. On the one hand, there I was gorging myself, stuffing goodies down my gullet … how long would it be before I was like that fish, dragged down by the weight of the shit I made for myself? Food is life ... but life eventually ends up as food.

Not only was the fish a metaphor for my personal life, but it could equally have stood as a symbol of this country's fledgling democracy. Unable to swim freely until it can squeeze out the baggage of its past, the fish was caught between past and future, between promise and fulfillment.

You see, some people look at a shitting fish and see only a shitting fish, but being the Eminence Grise that I am, I also see the birth and death of Nations, and the dark heart of the human psyche.

Tune in tomorrow for another stupid metaphor.....
Posted by Somtow at 8:44 PM