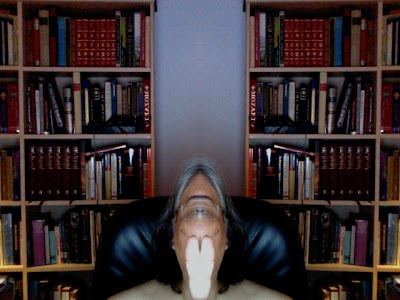 You can rationalize it how you like, but it's still just about the worst thing ever to happen to me in my entire life. I am referring to another hard drive malfunction (or was it that? nothing else seems to be affected) which annihilated another complete movement of my long-awaited Requiem (by whom?) ... causing me to have to reconstruct the entire piece from memory and a few scraps here and there.... is this the Voice of God telling me not to compose this piece of music?

The last two days have been more full of spectacle than usual. It began with Amitha's article about me in the Bangkok Post - a very big piece indeed and in the words of two people who wrote to me about it, "grudgingly laudatory" ... yes, they both said this, which shows you the lexical likemindedness of the kind of people who consider themselves to be my friends. Despite a few minor cavils, I was very glad of this article because it brought a number of issues out into the open ... things like the famous evil spam that circulated two years ago in an attempt to destroy my career ... and so on. And the various vicious attacks I have to endure, and so on so forth.

So that night, the under the aegis of the very generous Khunying Patama, one of our benefactors, the Bangkok Opera was co-hosting the funeral of HRH Princess Galyani Vadhana at the Grand Palace along with other organizations also sponsored by the Khunying. It was a solemn and beautiful occasion. Except that one of those vicious attackers happened to be present — he runs one of the largest, though in some ways the least artistically successful, conservatories in the region. So there was a bit of unpleasantness when the Khunying beckoned all the heads of the various organizations to be photographed, and this gentleman refused to be in the photograph because of my presence; he also went off in a huff with his whole team and sat in the back of the hall.… This kind of thing is symptomatic of everything that's wrong with the arts in this town. But hey, I'm used to it now. So let's talk about things that are right with the arts here.

The next day, I had to appear at a press conference to announce the Silpathorn Awards. But the most exciting thing (to me) about this press conference was that it took place in an art gallery on the other side of town (rather near to where a large crowd is protesting the government). The gallery was having an exhibition of art by kids — aged 6 to 18 or so — and it was one of the most thrilling art shows I've ever seen, full of brilliant colour and — to my amazement — trenchant social and political comment.

For instance, look at the picture I have just posted (above) - by a 17-year-old kid. It shows the seduction of Sita by Ravan (from the Ramayana) being performed by traditional puppets, while Superman busts in through the wall and old superhero costumes lie around. Not only is it very well executed technically, but it seems to say a LOT about modern Thai society. And the title: "Don't pull my strings" — adds to it. It's a really thoughtful picture about the collision between traditional values and pop culture.

And it's got irony. I always thought that the arrival of irony would mean the final maturing of the arts in Thailand. It's good to know that young people are developing a healthy sense of it.

So, though I was bummed out with the quarrelsome and backstabbing old people, I felt a sense of excitement and renewal when I looked at the work of young people....

Vox Dei? The funeral service was beautiful, as it always is, despite the childish behavior of the aforementioned. But I didn't feel the same emotional frisson that I felt before, at those midnight services many moons ago, with the virtuoso chanting. This was a more public mourning, heavier on spectacle than those other, intimate services.
Posted by Somtow at 5:27 AM