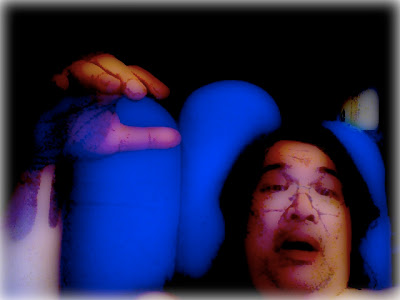 So, tonight, I finally saw this play which has the improbable title of "The Campaign to Confer the Public Service Star on JBJ". I don't know if it was a good idea to sleep through (and therefore miss) the opening night ... but tonight had the added bonus of being the director's birthday, so Trisdee and I managed to get in, somehow, on the champagne and cake after the show.

Eleanor Wong's play is simply one of the best new plays I've seen in a decade. I'm just in awe of this woman's command of her craft.

It's, I suppose, a sort of political satire. Structurally, it's almost an identical twin of Joe Di Stefano's screenplay for Pyscho, indeed it's the only theatrical work I know of that has this structure. But of course it's all put to a completely different use. In fact, only a collector of paradigms such as myself could ever leap to such a bizarre connection, but amazingly, the paradigm fits.

By the Psycho structure, I mean that the person set up as the protagonist, and with whom all our sympathy is engaged, gets shockingly killed off at the exact midpoint in the play, and the second half introduces a completely different central character who spends the second hour unravelling the mystery of what happened in the first act. It's a daring conceit. It shouldn't come off, but improbably, it works brilliantly. The first half, played for laughs, deceives us completely; in the second half, the laughs come just as thick and fast, but because the hero has been killed in the first act, we aren't so easily deceived; indeed, we are quickly drawn into a labyrinth of paranoia and suspicion which has all been elegantly set up in the first half.

Lots of things were impressive ... the fact that two people played a dozen roles, in a bewildering array of accents, age groups, and personality types ... Brian Tan's very cunning little cinema montages between each scene ... (I met this Brian guy at the party afterwards, and I thought he was some 15 year old kid, was startled to see him drinking ... boy did I feel stupid when he said to me, "Actually, I'm very old" … you cannot tell with Asians, even if you are one yourself!)

But what particularly engages my attention is that this play which starts as a joke and escalates into a searing indictment of the Singapore government's Machiavellian cynicism, callousness and venality, has been produced in a country which, in theory, is far more repressive than Thailand … funded in part by the very government it chillingly satirizes.

As everyone (who is anyone, at least!) knows, I had my own brush with the censors last year. But this was nothing like a formalized censorship system; it seems to have been a haphazard thing, perhaps even a personal vendetta, and despite the various threats, I was not dragged off to the Gulag in the middle of the premiere. I wrote a highly public letter of protest to the prime minister, and no one hauled me off to a firing squad.

And yet, I don't think a play such as the one I just saw would be put on in Thailand, paid for with public money, and performed in a national cultural institution. Thailand has had numerous scandals, sweepings under carpets, corruption within corruption scenarios and whatnot, but we don't wash our laundry in public with the obvious glee that these Singaporeans are now doing. They are just having a great time pointing out their own foibles and at the same time not having some huge complex about having foibles ... and this seems to be the one thing that Thai society doesn't yet do well ... this ironic detachment thing. There's still too much terror of looking like a fool. But we are all fools. That's the human condition, isn't it?

So, Ivan Heng and I will definitely do an opera together, and it will be High Camp. I will not reveal the subject until it is set in stone but I guarantee that my science fiction readers are going to cream.
Posted by Somtow at 12:53 AM