Getting Off the Pot 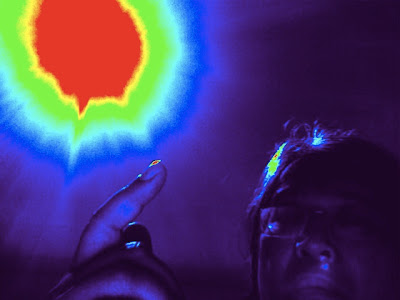 So, there is a lot of death in my dreams, but oddly enough it's never the people one expects, and never my own. For instance, two days ago, I dreamed that the grandmother of a brilliant young string player in our orchestra (who shall remain anonymous, as I don't want to upset this person) was dead, and the entire dream was spent helping this musician cope with the grief.

This has been a long weekend here in Thailand. It's the Queen's birthday. Everyone is out of town, but for me it's been a weekend of unmitigated work, and not really the kind of work that I enjoy as it is mostly things like moving bits of type around in a photoshop document or writing stern emails berating my staff. I was so bummed out by the world in general that I decided to sign up for Second Life. There, I spent several hours adjusting my avatar into the perfect me: long, blue hair, very slender, attractive clothes, etc; then I went to the local opera house, where nothing of interest was playing. I also flew around.

When I landed, however, I was still the same person. I have not gone back to Second Life since, even though there's a huge article in Time magazine about how it's taking over the world.

Then I dreamed about the infamous Bob Halliday, who appears as a character in this book I'm writing now. In the book, he is one of the Five Rishis, who guard all knowledge. If you knew Bob, you would realize that this is a very accurate description. Anyway, in my dream, I am wandering around through this huge emporium of unwritten novels, unfinished works of art, and so on, which is a cluttered and inexhaustible treasury. I come across two unwritten books by Frank Kermode, called "The Sexuality of Greece" and "The Sexuality of Rome". The names of the books gradually appear on the spines as I bend down to examine them. As I move away, I suddenly trip and break a huge blue glazed pottery vessel. I wonder if I will ever put it back together again, as I awaken.

Now, although Frank Kermode did teach at Cambridge during my time there, he never taught me, nor does he have anything to do with sexual history books; Shakespeare's imagery is more his cup of tea. (I'm thinking it's a dream-pun and it's the word "commode" that it ACTUALLY refers to.) I break a pot, you see. Is the dream telling me simply to shit or get off the pot?

Had a deep and terrifying conversation with some members of the Bangkok Opera's inner circle tonight, sitting in the bar of the Polo Club (of which, appropriately enough, I am not a member) and wearing sandals (there is a sign forbidding sandals at the entrance.)

The conversation touched on an important subject: Is there life after opera? I'm going to go to sleep tonight meditating on this question, and when the answer comes, it may be a second life after all ... or even a third.
Posted by Somtow at 3:09 AM